Galbi Jjim or Kalbi Jjim is a Korean style braised short ribs that takes a long time to make. But when you use the Instant Pot, it takes half the time and the meat becomes fall-off-the bone tender. It's a perfect family meal that everyone will enjoy!

What Is Galbi Jjim?

Galbi Jjim is a Korean grilled ribs recipe. It's also called Kalbi and is just as popular as kimchi. This Korean style short ribs usually takes a very long time to make.

This is a funny question that I had to answer before giving you the recipe. You see, it's a really popular Korean dish in America, but not everyone in Korea can afford to eat it.

It wasn't until I came to the U.S. when I started eating Kalbi; maybe once a month. If at that.

Anyway, when I eat Kalbi, it's usually in the summer when outdoor grilling is easy. The smokey and savory aroma of grilling kalbi wafting through the neighborhood always makes my neighbors wonder why their steaks don't smell the same.

But when the weather gets colder, we take the same flavors "inside" because we need to nourish our bodies with good fats and protein. And I thank my Korean ancestors for coming up with this way to enjoy short ribs in the winter....even if I had to wait until I came to America to enjoy it. Oh the irony.

Are Braised Korean Short Ribs The Same As Galbi Jjim?

I see a lot of recipes with titles that say "Braised Korean Short Ribs" and it's misleading because technically, it's not 'braised' since you don't brown the meat before cooking. It's simply simmered (definition of 'jjim') for hours to break down the protein to tenderize the meat and to lock in all the flavors until they are happy together.

It's kinda how I make my fighting children make peace. Keep them in the same room until they work out their differences. It makes me a monster mom but it works. It's the same with Kalbijjim....being in the same pot for hours, the meat and spices have no choice but to get along REALLY well together.

Speed Up Galbi Jjim Cooking Time With An Instant Pot

The downside of making Kalbijjim is the HOURS it takes to simmer on the stovetop. You can't leave the house and you go bonkers smelling the deliciousness for hours while your stomach growls.

Now I use a pressure cooker to simmer for less than an hour. And of course, making it in the Instant Pot is even better since it's stainless steel and unlike my old stovetop pressure cooker, I don't have to babysit it. It is a game changer.

The beauty of making this dish in the Instant Pot is that you can use frozen meat! How great is that? Did I say it's a game changer?

Which Type of Ribs Are Best To Use In the Instant Pot?

One note on the meat. You can use this sauce for any type of meat but make sure it has some fat on it. If it's too lean, the meat gets too dry and chewy even in the pressure cooker.

That's why short ribs work really well for this recipe. Some people cut out the bony part of Prime Rib and save them to make this. I think it's brilliant!

If you don't have a pressure cooker, you can simmer for at least 1-2 hours in a heavy bottom pot, like Le Creuset or Staub.

You will have to baby the pot on the stove and watch to make sure it' doesn't overflow or burn. And it'll cook in twice the time as the electric pressure cooker. But, if you don't, that's ok. I still like you so I provided the instructions below in the recipe card.

I used to LOVE my slow cooker because I'd throw in all the ingredients and go to work. Then, I'd come home to house filled smell of galbi simmering. So I get the convenience of a crockpot but honestly, it took some planning. Again, I get why people love their crockpots so I provided the instructions below in the recipe card for y'all crockpot loving cooks.

Ok, enough of storytelling and here is the recipe using different methods. 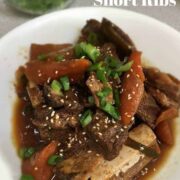 Galbijjim is a Korean style braised short ribs that your family will enjoy. Cooking in the pressure cooker make the meat fall of the bone tender but also, it'll take half the time as on the stove top. But check the various methods you can use if you don't have the Instant Pot.
Prep Time10 mins
Cook Time55 mins
Total Time1 hr 5 mins
Course : Entree
Cuisine : Korean
Keyword : Beef
Servings: 8
Calories: 770kcal
Author: Dr. Karen Lee

What do you do with short rib bones?

After you've cleaned out the meat, save the bones to make bone broth! I freeze them until there are enough bones to add to the joint bones to make broth. No wasting food around my kitchen!