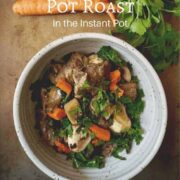 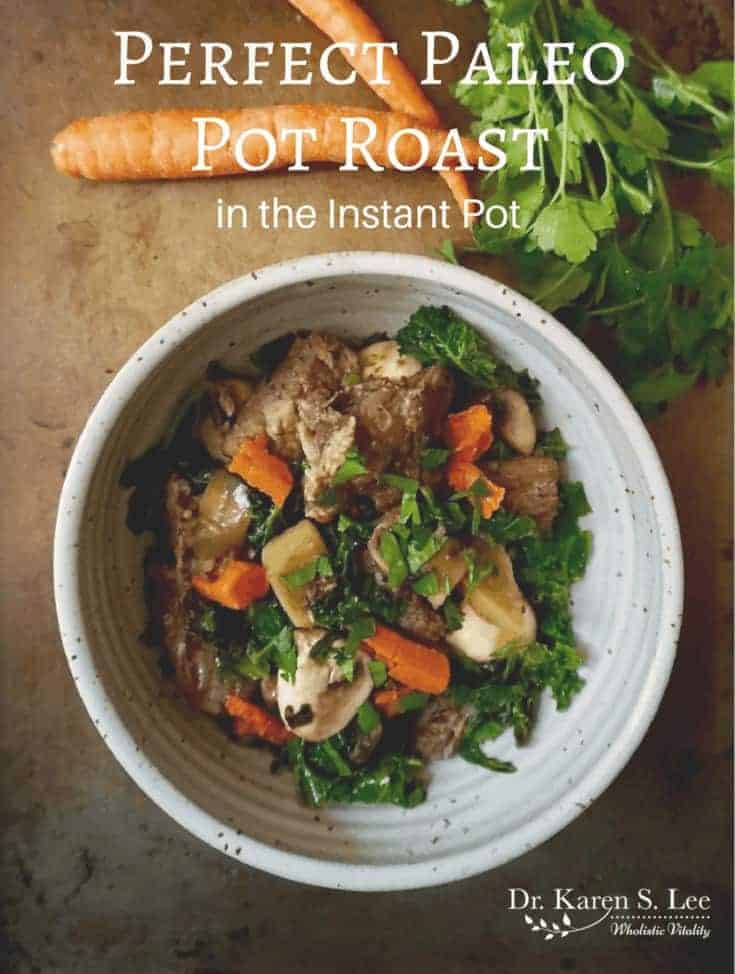 Pot roast is a comfort food that everyone can relate to. But it takes planning and a long time to cook in the oven. Like, hours! But not in the Instant Pot®! And you know what’s even better? Add the veggies at the end to the almost cooked meat and now, you have a side dish that you don’t even have to use another pan to cook! And who would mind not having to wash another dirty pot or pan? Not me. This is one of the reasons why I love cooking in the Instant Pot. No extra pots or pans to wash. Read more on why you should consider Instant Pot here if you don’t have one yet and see all my Instant Pot recipes here if you already have one.

One of the best cuts of meat – and inexpensive – for a pot roast is a chuck roast with marbleized connective tissues and a little bit of fat that are weaved into the muscles. Chuck is from the front – shoulder – of the animal so the muscles are a bit tough. But because of the connective tissues that hold the muscles together that ‘melt’ down, creating gelatin, it tenderizes the meat when cooked. Look for “chuck roast,” “boneless chuck,” or “shoulder steak.” The cut I used for this recipe was a thick chuck steak and not a rump. I had to cut into large pieces so they would snuggly fit inside the inner pot.

Don’t be surprised if you end up with meat chunks that fall apart and melt in your mouth. As you can see in the picture, chunks of meat are mixed in with the veggies and not sliced. If you want meat slices, you can use rump or eye round but I warn you; it will not be juicy and tender. 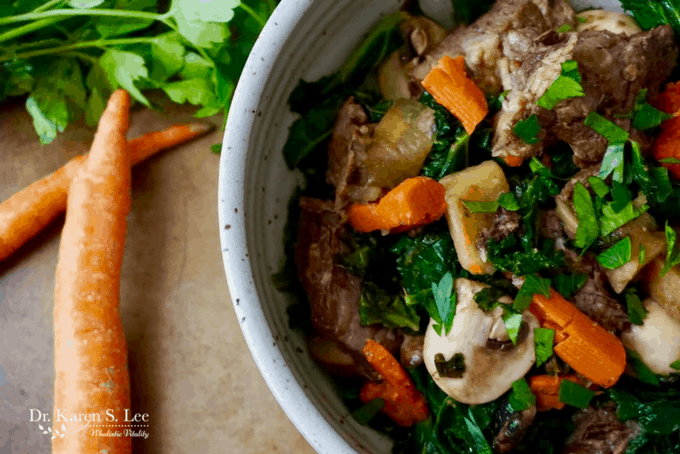 Brown or not to brown?

And since you can’t sear pot roast afterward, you don’t need to brown the meat before putting it in the Instant Pot for this recipe. That’s even easier! So stop browning meats from now on. Sear/brown it afterward, which is actually called “reverse sear’, for steaks and prime ribs.

To paleo-fy and to make it low-carb, I used daikon (Japanese radish that are long and white) instead of potatoes but you could use any root vegetables like, turnip, jicama, Japanese white yam, rutabaga, radish, and even yucca and they will be as tasty as white potatoes, if not more. It’s also less heavy. Radishes will be lower in carbs so check your carb calculator to see which root veggie you should use.

Normally, all meats should be cooked with “natural pressure release” or NPR method with Instant Pot for more tender result but for this recipe, you could use quick release (QR) after 60 minutes since you’ll be adding veggies at the end to be served as a side. You can also add sauteed kale or spinach at the end if you like more greens, as pictured.

Pot roast is my family's favorite beef and vegetable dish. And it's one of my favorite dishes to cook since it takes a fraction of a time and all in one pot at once. The prep time of 40 minutes includes 30 minutes of meat coming to room temperature. Cook time of 1 Hr 5 min is the actual pressure cooking time. And adding 10 minutes before you can release the pressure at the end gives you a total of 2 Hrs 5 Minutes from start to finish.
Author: Dr. Karen Lee
Course: Entree
Cuisine: American
Servings: 6
Prep: 40 minutes
Cook: 1 hour 15 minutes
Total Time: 2 hours 5 minutes
Print Recipe Pin Recipe
US Customary - Metric

To Add After Meat is Cooked

This is a two-part instruction so you can serve veggies as a side. If you are buying the meat from a butcher, don’t let him trim the fat. You want the fat to make the meat tender so don’t trim it before cooking. You can always skim the fat after the meat has been cooked.

PIN IT FOR LATER