Korean Bulgogi (BBQ beef) is a salty and sweet dish everyone loves. This paleo and keto-friendly recipe is our favorite!

If I were to write a Korean Paleo cookbook, it would be very similar to Jean Choi's recently published "Korean Paleo: 80 bold flavored gluten and grain-free recipes" cookbook. In fact, most of the recipes in this lovingly crafted collection of authentic Korean recipes that have been paleofied are dishes we eat on a weekly basis. These are recipes I grew up with and my family requests very often.

And what's a Korean cookbook without mentioning JapChae - sweet potato noodles with mixed vegetables and beef - especially if you're following a paleo diet since these noodles are grain-free.

I also have a recipe for Japchae as it is also one of the most popular Korean recipes everyone loves. Jean uses maple syrup and there's nothing wrong with using it if you are not watching carbs.

Jean was generous enough to allow me to share her recipe so scroll below for the full recipe and her meat tenderizing tip.

What Is Korean Bulgogi?

Korean BBQ Beef called "Bulgogi" is a quintessential salty and sweet meat dish everyone loves. This paleo and keto-friendly version is our favorite meat recipe and it will be your family's too.

Korean BBQ Beef, "Bulgogi",  is a special dish that we used to eat on special occasions like holidays, birthday, and celebrations of some kind. Bulgogi is full of umami from soy sauce and pureed fruits like apples and Asian pear. The fruit puree tenderizes the meat and adds sweet flavors while deep salty soy sauce envelop the meat. We used to mix the salty-sweet meat dripping from the dish with hot rice to sop up every drop of the flavors.

How To Make Bulgogi Keto-Friendly

Since we've been on 'lazy keto', I try not to add fruit puree to Bulgogi but if you are not following a keto diet, adding fruit puree adds another depth to this popular dish.

If you want all the exact ingredient amounts, scroll down to the printable recipe card. In this section, I'll share information about the ingredients, along with any substitutions you can make.

I used sirloin steak since it is the most tender cut of steak. Look for a steak that is well-marbled.

Here's what I used in my marinade:

What do you serve with Bulgogi?

Serve this with a seasoned Spinach Salad. You can also serve it with kimchi, sautéed eggplant, or softened beansprouts.

What cut of beef is best for Korean BBQ?

I prefer sirloin steak for it. This cut is the most tender and honestly tastes the best. If you don't want to use sirloin, at least pick out something that has lots of marbeling.

What does bulgogi mean?

There are so many more recipes that I could mention, like Kimchi, Chicken Stews, Dumplings, Soups, Stews, Pancakes, Sauces, and even desserts! But I'd have to write over 1000 words and I rather you go buy Jean's book. "Korean Paleo" to try all the recipes yourself.

If you already tried Korean food, you will be addicted to her recipes and if you haven't tried Korean cuisine, you will love it. She even has Korean "Fusion" recipes to convert your favorite dishes like pizza, tacos, fries, burgers, and more with bold Korean flavors!

Now here is the Bulgogi recipe from Korean Paleo cookbook. 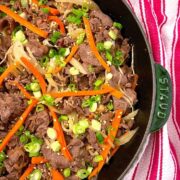 To make the recipe keto-friendly, leave out the Asian pear and serve over cauli-rice or over zoodles or lettuce wrap.

« How to Cook A Perfect Steak
Non-Toxic DIY Dishwasher Tablets »