Cucumbers are growing very nicely in my backyard’s container garden. And looking at the fresh cukes reminded me of my daughter’s favorite kimchi made with cucumbers called Oi-So-Bagi (oh-yee-soh-bah-gi.) It is also one of my favorites because it’s quick and easy to make and you don’t have to wait too long to eat them because they are ready in a day or two, unlike nappa cabbage kimchi. And even though, it doesn’t have as much probiotics as regular kimchi, because it ripens quickly, it’s still refreshing, tasty, and makes great side dishes with any entreé. I hope you enjoy Stuffed Cucumber Kimchi (Oi-So-Bagi) as much as I do!

And it’s fun to make Oi-So-Bagi since you have to stuff the cucumbers with all the goodness with your hands…which is the reason why my daughter loves to make this. She loves playing with food (ahem) and what’s better than having fun while making delicious food? Make sure to wash your hands thoroughly afterwards or wear food safe gloves to handle the spicy peppery mixture for stuffing. You’ll thank me later.

Try Oi-So-Bagi instead of pickles. It’ll add heat and more flavor to your next meal!

Cut the cucumbers vertically to prepare them to be stuffed. 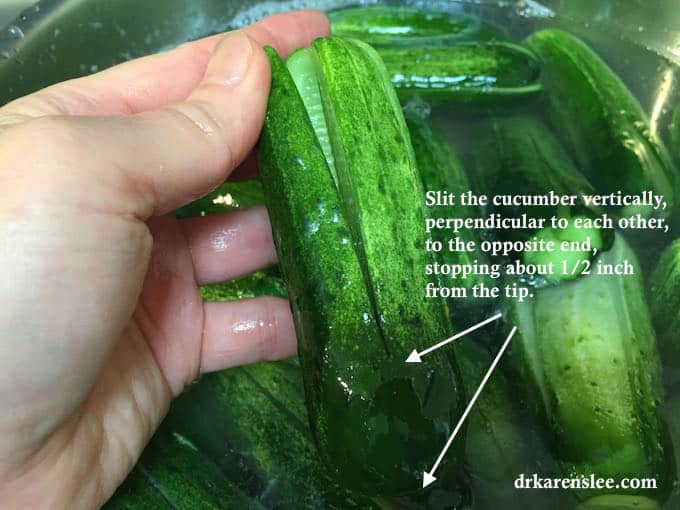 See how it looks after the two vertical slits? 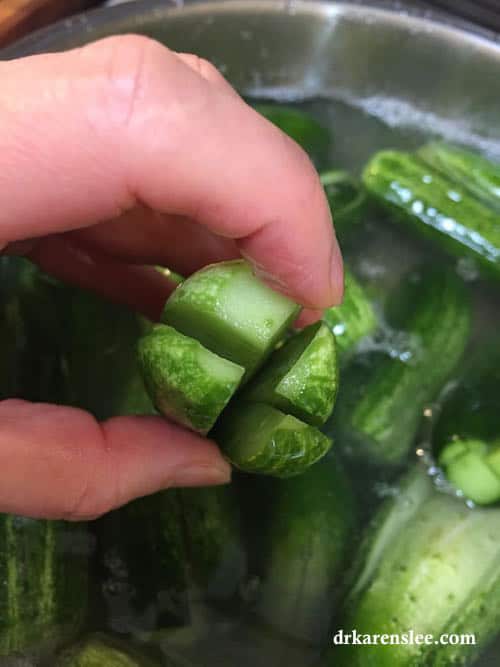 Then, soak the cukes in a salted brine for about 30- 60 minutes until they are limp. 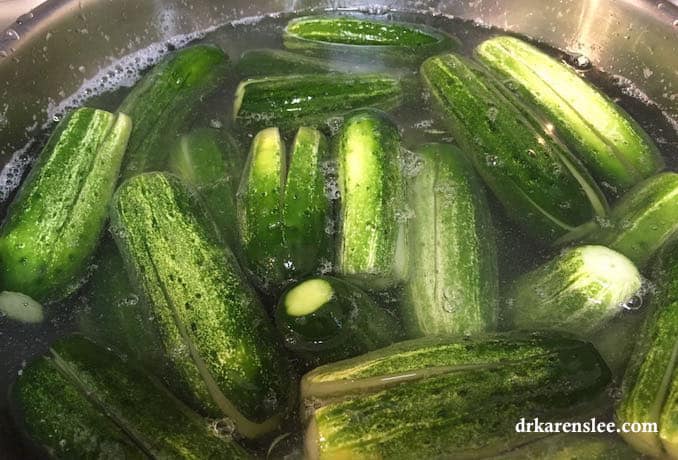 Pull one of the spears away and when it’s limp and soft, they are ready to be stuffed! 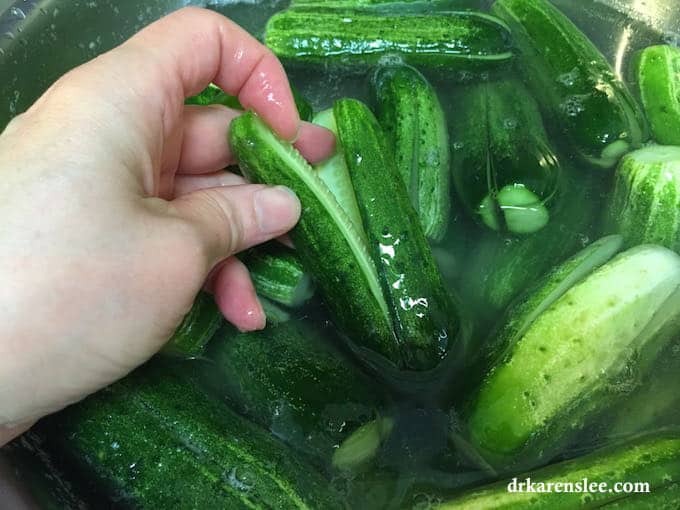 Doesn’t your mouth water when you see this goodness? So much flavor in this stuffing mix. If you can’t find Chinese Chives (the flat greens in the picture below), you can use finely chopped scallions but they won’t give you this ‘special’ flavor but still good enough. You can also try with regular chives, although, I could never find chives that are sold in large quantities. 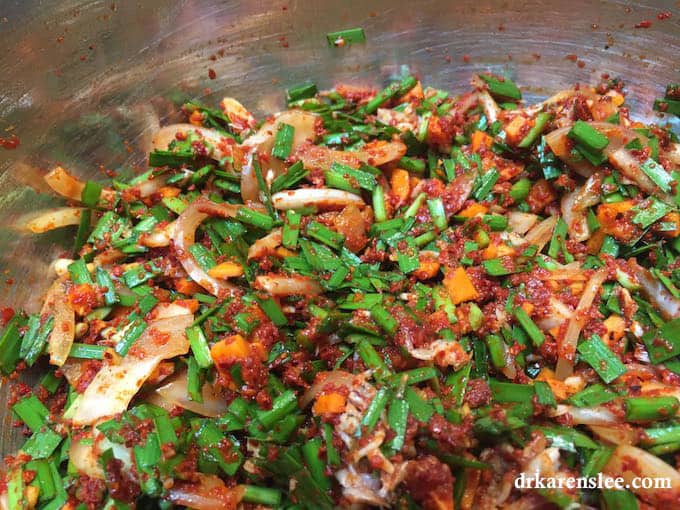 Stuff the cukes liberally inside and smear the mixture on the outside. Massage them well! And after you stuff the cukes, this is what you will end up with! Is your mouth watering? 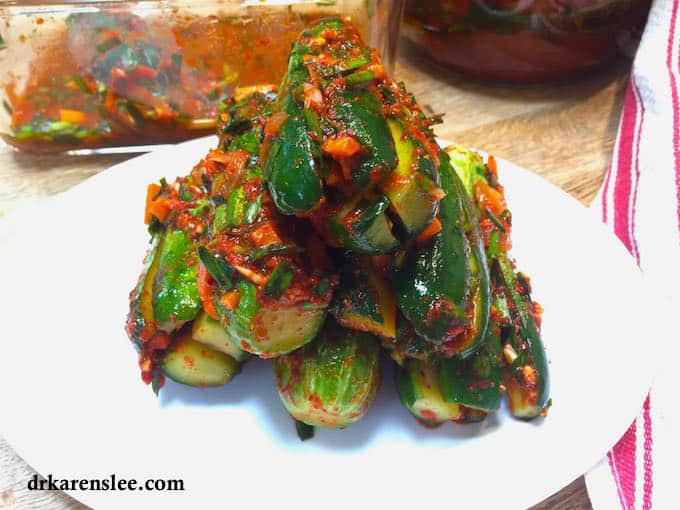 Place the stuffed cukes nicely stacked in a large glass bowl, cover it, and leave it out for one day. Then, transfer them to a large glass jar (I have about 6 jars like this for making kimchi and kombucha), and place the jar on a plate, just in case the liquid overflows, and refrigerate. They will be ready for eating in just one to two days after you put them in the refrigerator. They should stay firm and green for at least a week. But if you wait too long, the cukes will turn yellowish, become too soft and turn sour. There is nothing wrong with eating sour kimchi (In fact, some Korean dishes require sour kimchi – like, Kimchi Casserole) but cucumbers will get soggy and soft and so I eat them when they are crunchy.

If you loved your first batch of cucumber kimchi, the chances are you’ll want to make it again. Here is my short cut trick.

DO NOT THROW OUT the liquid from this batch!

You can reuse it t make a new batch. A slightly different version but still,  the ‘new’ cucumber kimchi will be just as good, if not better! Here is how:

Cut cucumbers in spears, vertically, like pickles. Then, cut in 1 inch cubes. For about 10 cucumbers, sprinkle them with about 1/2 tbsp of sea salt and refrigerate for about 30 minutes. After 30 minutes, rinse the cukes in cold running water, drain well and dab them with clean kitchen towel to dry off the excess water. Then, add them to the ‘old’ cucumber kimchi liquid and refrigerate. The ‘new’ cucumber kimchi will be ready in 24 hours to be eaten. It’s like getting a second ferment! Enjoy! 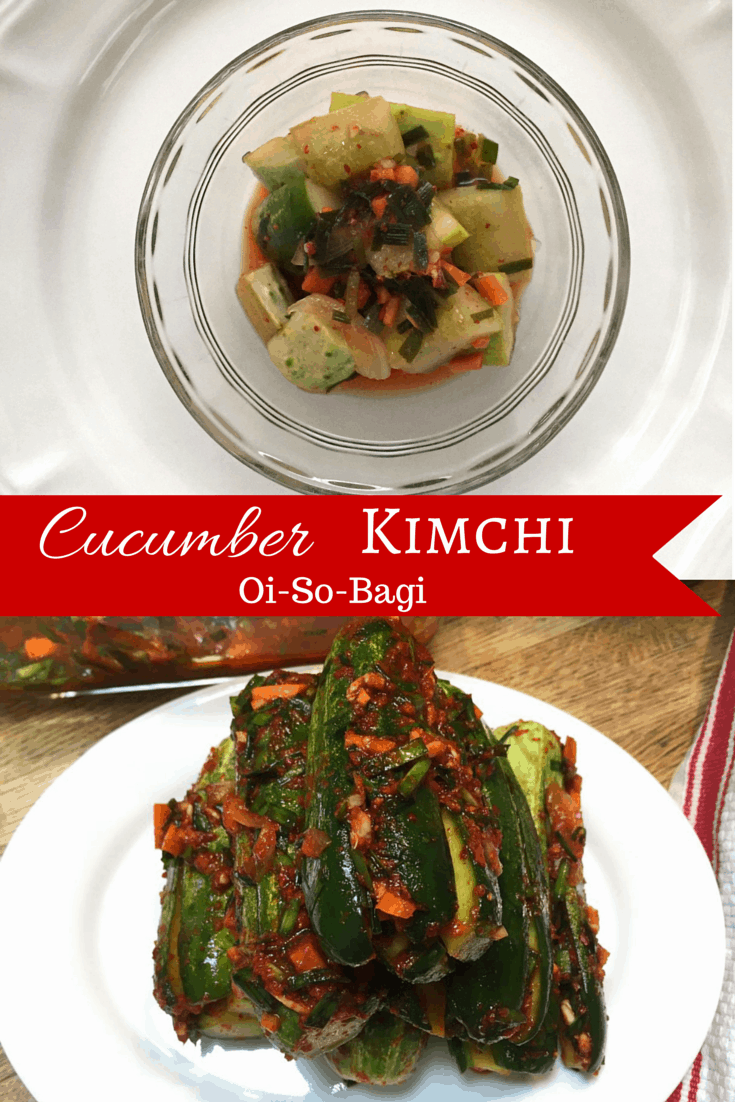