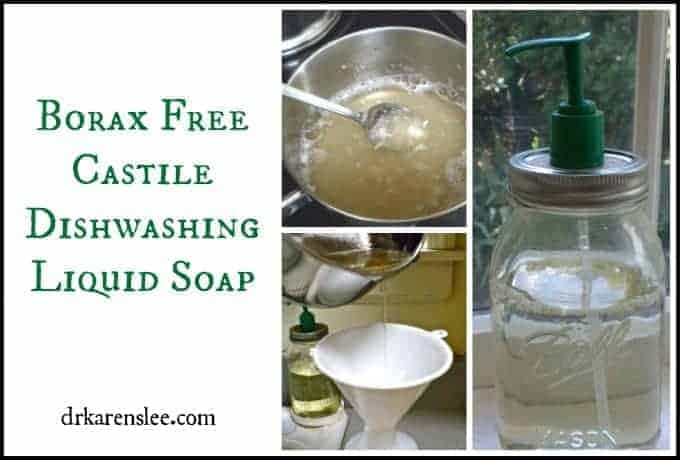 Remember when I was not very impressed with how castile soap in my homemade dishwashing liquid soap was behaving? It left a cloudy film on my dishes and I was not too happy. You may have experienced it too. In fact, it did the same thing in my dishwasher soap formula so I had to come up with this revised formula. Sometimes, I had to rewash them and how un-eco-friendly (and frustrating) is it to rewash a load of pots and pans that you just finished washing???

And do you know 'why' soap - especially castile soap - can leave a film? I explained in this post that soap reacts with mineral in the water and forms a film whereas detergents reacts less with mineral. And now, thanks to American Cleaning Institute (ACI), (Yes, there is such an institute in Washington D.C. It just might be my next favorite hangout!) you can understand exactly how it happens.

Although soap is a good cleaning agent, its effectiveness is reduced when used in hard water. Hardness in water is caused by the presence of mineral salts - mostly those of calcium (Ca) and magnesium (Mg), but sometimes also iron (Fe) and manganese (Mn). The mineral salts react with soap to form an insoluble precipitate known as soap film or scum.

And here is a picture on the left from the ACI to explain what that means. All types of water has minerals. Some has more than others. So even if you don't use soap, you can see the mineral deposits on your splashboards and counters if you have hard (mineral rich) water. Some people have to use water softeners because of the mineral deposits. Have you ever taken a shower and soap never stays on your body? That's hard water.

But even though detergents are better for hard water, I wouldn't use it to wash dishes since it's not that healthy for us and for the environment.

So I used my own homemade dishwashing soap with washing soda (to soften the water and to thicken) in the past but lately, I was wondering if I should even use washing soda now.

I discovered that washing soda is caustic when I made my own a couple of weeks ago. Remember how I told you NOT to taste it because it's NOT edible? So I wondered if I should eliminate washing soda too just like how I eliminated Borax from the dishwasher "detergent" and  the laundry detergent. Hmmm...

Well, I experimented and came up with a "new and improved" dishwashing liquid soap without borax and washing soda. It turns out washing soda IS used for water softener because it's a form of salt. So why not just use kosher salt? Right? Right. Less ingredients the better is my motto.

Combine the ingredients and gently heat in a pan while mixing. You'll see salt harden as soon as you add it to the pan. 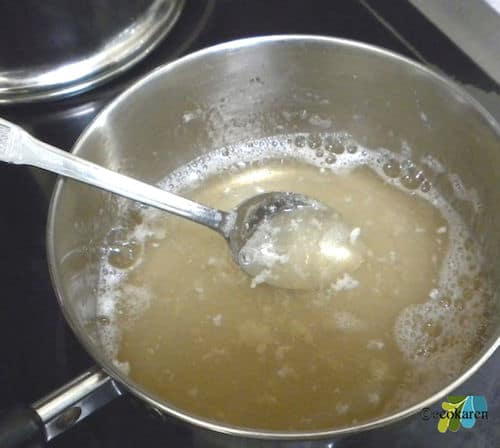 Gently stir until it's melted completely. When melted, cool it in the pan for a few hours or over night. If the mixture is cooled and the consistency is to your liking, pour into the squirt bottle or a mason jar you are going to use. 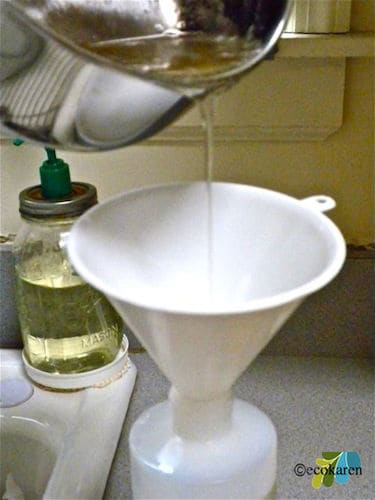 If the soap is too hard, add more water, a teaspoon at a time, and heat again. See how one of my concoctions solidified too much and became a solid block? That happened when I didn't use water. I thought, "Why add water and add salt to thicken? I'll just skip the water." Yea, that didn't work out that well as you can see. 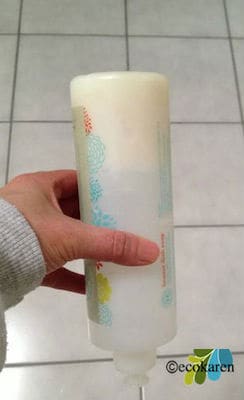 Here are some observations I made about using Castile soap for washing dishes.

Rinse - When washing the dishes with this soap, rinse quickly afterwards. Do not let a sink full of dishes sit in soapy water using castile soap. Longer it's in contact with castile soap, more it will react with the mineral, forming a cloudy film. That's the reason why sometimes using dishwashing detergent made with castile soap comes out filmy and cloudy. Work quickly to rinse.

Salt - salt is a water softener and it also creates suds. Washing soda is actually used as water softener, it turns out. And the reason I used it for the dishwasher is because I can add vinegar as a rinsing agent and it can help with mineral removal. But for hand washing, I don't like to use the washing soda since I don't have a chance to rinse with vinegar. Actually, that made me think of the next point...

Vinegar rinse - if you find the dishes to be cloudy, mix about ½ C of distilled white vinegar to about gallon of water. Soak the dishes for about 10 minutes and rinse them well. Using hot water can exacerbate the film so use cool water to rinse. If the dishes are still cloudy and you can't get the film off, use dishwashing liquid soap made by companies like Ecos or Ecover (plant derived and aquatic animal friendly) to wash them again. Once the film is stuck on the dishes, you have no choice but to use commercial dish soap to take them off. But with this formula, you shouldn't have problems as bad as using castile soap alone. 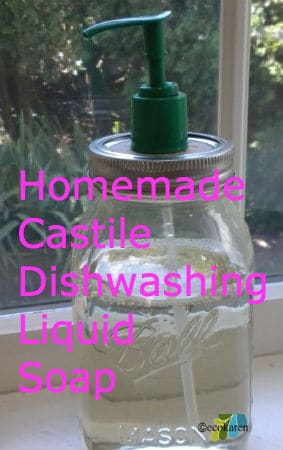 P.S. If you want to buy castile liquid soap (affiliate link) to try this recipe without waiting for the giveaway, there are many places you can buy, including your local supermarkets. But Amazon (affiliate link) and Drugstore (Not an affiliate) also carry them and are pretty inexpensive.