We had some visitors the other day that just would not leave. They were unwelcome house guests and at first, I thought they followed me when I came inside from grilling. But even after my hubby swatted one to smithereens, I kept seeing more….everywhere. I had a few nectarines, bananas, and lemons on the kitchen counter but didn’t see any around them so I didn’t think they were fruit flies. Don’t fruit flies hang around fruit, ergo, the name, “fruit flies”?

But I was wrong. There they were – my worst nightmare – tiny fruit flies, making kamikaze runs with evasive maneuvers around me, dodging my {slow} flailing arms. Where is Mr. Unagi when you need him?

I love animals and all things living but these, these, annoying pestilent beings are nuisance and their mere presence only means, there is rotting thing somewhere that I didn’t clean up properly. It only reflects my inadequate house keeping and inedible food hiding to be cleaned up somewhere. And not only that, they’ll be multiplying faster than I can annihilate them. UGH!

What are these pestilent beings do anyway?

Fruit Flies – a.k.a. Drosophila Melanogaster – are those pesky-tiny-little-impossible-to-get-rid-of-flies that appear out of no where. Sometimes, when you realize your peaches or bananas are finally perfectly ripe to eat, these winged pests come out of thin air, as if they received the same memo. Or your benign little houseplant, all of a sudden, is sending out X-Wing fighters to fight you, thinking,  you are a Tie Fighter  (What? You never watched Star Wars? Get. Out.)

Anyway, I hate fruit flies. When I studied genetics in Biology, I loathed seeing them, even in the closed lab jars, dead or alive. Did you know that Thomas Hunt Morgan, a scientist in the 1900’s discovered chromosomes – those microscopic wiggly things that you inherit from your parents? You know, the key to the map of fundamental make up of who you are? Like your good (or not so good) looks, charming (or grouchy) personality and even down to your allergies to foods and animals? And do  you know that Morgan learned about chromosomes by studying fruit flies? Yup. He found out that fruit flies are easy to work with when studying genetics because they are easily bred in labs, life span is a short 2 weeks, prolific, their chromosomes are fairly simple which makes it easier to study them, and their sex characteristics are easy to determine. In other words, they are easy to raise to use as lab subjects and easy to see the results.

But because they are “prolific”, they multiply like crazy. And they have wings which makes it impossible to catch them. I once lost, like, a few dozen of them in the lab because I didn’t use enough Ether to kill them and many of them escaped. They probably had a wicked hangover the day after and yeah, I got a “C” for clumsy in “Methods” section on that lab report. I wonder if that’s why I hate them so much. Hmmmm….

Anyway, this is not about how to do a lab experiment with fruit flies but how to get rid of them from your house naturally, once. and. for. all. But then again, maybe this post is about experimenting with them…. Mwha ha ha ha….revenge is saweeeeet!

There are many methods to  getting rid of fruit flies but the end game is, lure them to somewhere or some thing, and kill them in one fell swoop. Naturally, of course.

What you need to get rid of fruit flies naturally

A friend of mine uses beer to trap fruit flies and I tried using leftover white wine one night. They both worked but a green blogger – forget whom suggested this on facebook – said to add liquid dishwashing soap to trap them. Since I think beer or white wine is better drunk by me than being wasted on pesky flies, I got the idea to use fruity apple cider vinegar instead. And adding dishwashing liquid soap to trap them. Some people add a little bit of water to create bubbles to trap the flies but I didn’t. I just added these two ingredients and didn’t even mix them together. I left the bowl near the fruit basket on the counter, undisturbed. At the end of the day, in less than 24 hours, already a few were submerged in the bowl. (see above?) Then, day by day, more fruit flies were scuba diving in the bowl. 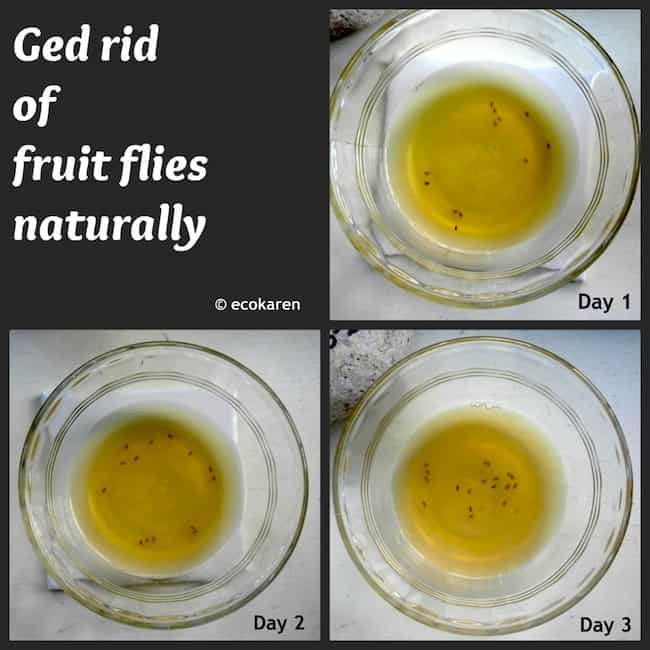 I don’t know how a Buddhist or PETA would get rid of Fruit Flies. Or if they would live with them in harmony. I thought about this as I watched them floating in the bowl for a moment.

But the moment passed and I was happy to have my fruit flies-free house back. And to have ripen fruits all to myself again. I hate cold refrigerated nectarines. And in order to avoid fruit flies as visitors again, I thought of a few ways to keep them away for good. I hope they will help you too.

10 Ways to prevent fruit flies in your home

Speaking of bugs, did you know that coffee grounds prevent ant invasion? Read about the many uses of used coffee grounds, including repelling ants here.

Have you had fruit flies visit you this summer? What method did you use to get rid of them?

Previous Post: « How to Clean Your Microwave Oven Without Trying
Next Post: Consumer Reports warns about arsenic in rice but FDA says it’s safe »