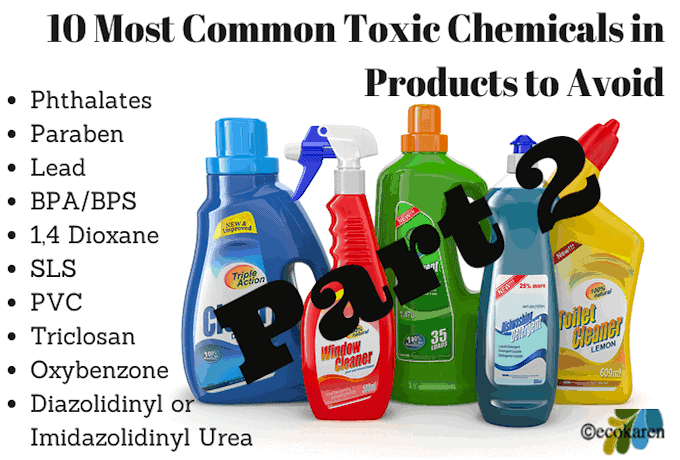 This is Part 2 of “10 Common Toxic Chemicals in Products to Avoid ” series.

In Part 1, I discussed Phthalates, Paraben, and Lead. While there many more chemicals – almost 80,000 chemicals to date, – than the ones I’m discussing in this series, these are the most common ones you’d find in your everyday products. You might have some in your house already.

Here are the next three chemicals you should avoid.

BPA has been the most talked about chemical with the infamous Nalgene reusable polycarbonate water bottle recall back in 2008. There have been numerous studies linking BPA as being endocrine disruptor and the recall brought the issue to the front page of dangers of plastic. I’ve posted about various ways your can be exposed to BPA here, BPA in cosmetic here,  and why I don’t use #7 plastic for this reason.

According to Environmental Health Perspective, “rodent studies have associated prenatal and neonatal exposure to BPA with early onset of sexual maturation, reproductive tract lesions, and altered development of the mammary gland, among other reproductive abnormalities. Having said, human exposure to BPA is widespread: the chemical was detected in the urine of more than 92% of the participants aged 6 years and older in the 2003–2004 National Health and Nutrition Examination Study (NHANES).” And in the same study, a “comparison of urine samples collected throughout the study showed that after using polycarbonate bottles for 1 week, participant’s mean urinary BPA concentrations increased by more than two-thirds to 2.1 μg/L, compared with the mean of 2.6 μg/L observed in the NHANES 2003–2004 study. The authors anticipate higher urinary BPA concentrations would result from drinking hot beverages stored in the same bottles.” And this is just one of many MANY studies done on BPA. So, companies have been moving away from using BPA and promoting “BPA-Free” plastic, mainly, Bisphenol-S (BPS), a substitute for BPA. However, in an expose by Mother Jones, BPS or any plastic, for that matter, is not safe and the plastic industry has been lying about their findings.

Not to be confused with 1, 3 Dioxin, 1,4 Dioxane is a byproduct of a petrochemical process called ethoxylation, which involves using ethylene oxide (a known breast carcinogen) to process other chemicals in order to make them less harsh. For example, sodium laurel sulfate – notoriously harsh on the skin – is often converted to the gentler chemical sodium laureth sulfate by processing it with ethylene oxide (the “eth” denotes ethoxylation), which can result in 1,4-dioxane contamination.

How is 1,4 dioxane bad? It is irritating to the eyes and respiratory tract, may cause damage to the central nervous system, liver and kidneys. Accidental worker exposure to 1,4-dioxane has resulted in several deaths. (source) The U.S. Environmental Protection Agency classifies dioxane as a probable human carcinogen at concentrations significantly higher than those found in commercial products. Under Proposition 65, dioxane is classified in the state of California to cause cancer.

In 2013, Proctor and Gamble agreed to reformulate Tide laundry detergent as a result of consumer pressure, like the petition Lori Alper from Groovy Green Livin started in 2012. This toxic chemical and myriad of other chemicals in commercial laundry detergents are reasons why I started making my own non-toxic detergents at home.

A common synthetic detergent and foaming agent SLS is what makes all soaps and shampoo foam. But it’s been connected to skin and eye irritation. But SLS is formed from a very harsh Sodium Laureth by ethoxylation process and a byproduct, a carcinogen, 1-4 dioxane can be formed, contaminating SLS. Ethoxylation is one reason why so many products have been found to be so toxic.

According to Care2, researchers at the Organic Consumers Association, who conducted tests for 1-4 dioxane on hundreds of products from 16 major brands in 2008, only 23 products were found to be free of 1-4 dioxane contamination. Many companies have quit using ethoxylated ingredients like sodium lauryl sulfate to avoid 1-4 dioxane contamination as well as allergic reactions, and the standard for the Whole Foods Premium Body Care Seal doesn’t allow it.

Review Part 1 and continue on to Part 3‘s report on PVC, Triclosan, Diazolidinyl and Imidazolidinyl Urea and Oxybenzone.