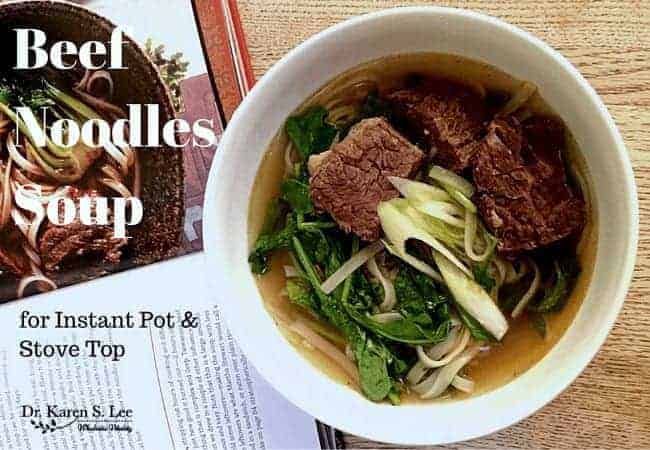 Blame it on my kimchi heritage; I love spicy food. But when it comes to Chinese food, there aren’t too many spicy options except Szechuan or som Hunan foods. My favorite? Beef Noodles Soup. Some say it’s from Hunan region and some say it’s from Taiwan. Regardless, this spicy and brothy soup is my kryptonite. The soup is rather simple with tender beef chunks flavored with star anise and fresh veggies. The heat from star anise (Amazon Affil) and spicy hot chili pepper flakes (Amazon Affil) fill your belly with spicy warmth. It’s a perfect soup for winter and summer. You’ll detox through pores naturally regardless what the outside temperature is. It’s a wonderful thing. Of course, you can always adjust the heat level with less pepper. I promise no one will call you a wuss. Ahem.

The traditional recipe has a ton of spices and it can take hours to make on the stove top so I rarely make it. Peter Meehan of Lucky Peach: 101 East Asian Recipes (Amazon Affil) must have felt my pain because he tweaked it to make it much easier  for his new cookbook. Of course, I “Instant Potized” it and came up with even a shorter way to make it. Not sure about his recommendation of Korean gochujang but any red chili pepper flakes – like the one you shake on pizza – will do.

I’ve been reading Lucky Peach sometimes (it’s also a print magazine) for its raw and honest articles about food culture and recipes by Peter Meehan, and a few salty food politics by David Chang, the beloved (and colorful mouthy) Korean chef of the famed NYC’ Momofuku, Ssam, Milk Bar and others. 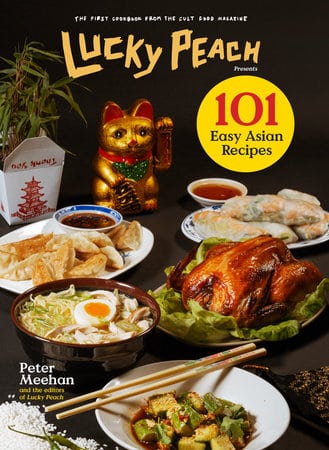 So when I learned they released their first Asian cookbook, I was interested in testing to see how ‘authentic’ they were. Of course, I checked out their Korean recipes first and I must say, they were p.r.e.t.t.y. close to how I make them. And to stay true to the title of the book, Meehan made the recipes as easy as they need to be and adhered to two simple rules.

1. No Frying – LOVE this since I hate making a mess. And he agreed. So there is no frying in this cookbook. Sautéing, yes; but no frying. No mess is a wonderful thing. Besides, there aren’t too many Asian dishes that require deep frying.
2. No Subrecipes – he only used ingredients you can get without searching the globe (the worst you’ll do is to order online) or recipes for cooking up exotic “jar of goop that you’ll never actually use for anything else.” Gotta love that!

The “Equipment” and “Pantry” sections are really helpful if you don’t have them or ever used them before. The recipes are divided into to “Cold” and “Warm” foods, which I thought was an interesting way to categorize foods. Then, there is an eclectic mix of categories like “Breakfast” (but no lunch or dinner), “Pancakes” (separate from the breakfast category), “Soups and Stews”, “Noodles”, “Rices”, “Chicken”, “Meats”, “Seafood”, “Super Sauces”, and “Dessert”. And you HAVE to read the “Desserts” section. If you’ve been to Chinese and Korean restaurants, you’ll get his gist. You’ll see why I laughed out so loud when I read it!

I thought it would have been even easier if the recipes were divided into different countries or ethnic regions but no big deal.

I can honestly say that MOST of these recipes can be made into Paleo if you use Tamari instead of Soy Sauce, omit the sugar and a few spices. The ingredients are all fresh and not processed. There are very few grains other than rice, of course. If you skip wheat flour for making pancakes and use Cassava Flour, as I have in making Korean Pancakes, the entire book could as well have been Asian Paleo. Other than a couple of somen and ramen recipes, noodles are rice noodles and sweet potato noodles (Jap Chae) so even the Noodles section is mostly Paleo.

I loved this book for my non-Paleo family members. But I “Paleotized” this Beef Noodles Soup recipe by omitting the sugar, rice vinegar, and Hondashi. You really don’t need them if you use rich bone broth or meat stock. If you are sensitive to Star Anise, though, you’re out of luck. You can omit it but you won’t achieve this distinctive flavor. Still, the broth you’ll end up with will be still amazing. I used less Tamari to make it lighter and used beef meat stock instead of Hondashi. The recipe called for bok choy but I used arugula because that’s what I had in the fridge. But any fresh tender green leafy vegetables will do.

I hope you check out this recipe and his book! 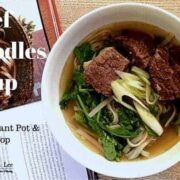 Stove Top Method from the Book