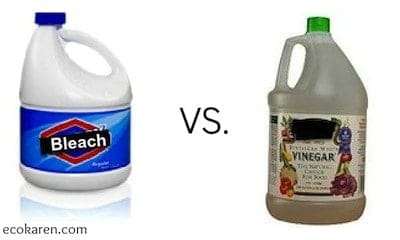 As the flu season approaches, I'm thinking ... "d.i.s.i.n.f.e.c.t." anything I can get my hands on. But I'm wondering if my obsessive vinegar use is good enough to fight those nasty germs that can wreak havoc during winter. My kids get sick at least once, like clockwork, no matter how many times they wash their hands and how religiously they take their vitamins.

So I was thinking, should I use bleach in drastic times like this? But I can't even walk down the detergent aisle at the supermarket without gagging. One of the reasons why I make my own laundry detergent. And I use vinegar in my dishwasher too! I once walked out of a restaurant because of lingering chlorine smell. The underlying message wasn't that appetizing anymore. "What was wrong with the restaurant that they needed to douce the place with chlorine?"

I had to do some digging to see if vinegar was enough to combat the upcoming flu season. I even dug up my old Microbiology class notes to see what works best on those invisible critters that cause so much havoc during winter.

Chlorine bleach is an oxidant and an extremely effective germ killer. Chlorine can kill mold on non-porous surface like tiles but not on porous surfaces like wood and grout. That's why even if you use bleach to clean your bathroom, mold reappears after awhile. The water agent in the bleach, actually makes it grow in the crevices of the grout. Some say, bleach just makes mold turn white but does not kill it.

It's recommended (and regulated) as a household cleaner by the U.S. Environmental Protection Agency (EPA), as being effective to kill microorganisms, such as the E. coli which responsible for many cases of foodborne illness. And it takes just a small amount to do its job - about 1 part bleach to 4 parts water.

But Chlorine is also very nasty. According to Material Safety Data Sheet, the vapor can cause harm to respiratory tract, lung, and the contact with chlorine can cause skin irritation. But the harm starts even before it ends up in your house as chlorine releases cancer-causing dioxin as well as brain-damaging mercury into the air during production. According to the American Association of Poison Control Centers, chlorine bleach poisons children every year.

The vinegar you buy in stores contains 5 percent acetic acid, which is strong enough to be antimicrobial. Some studies have found that vinegar, especially, in combination with salt or hydrogen peroxide, can inhibit the growth of some strains of E. coli. It's also an effective mold killer. Its production doesn't take such a toll on the environment, and while it can smell, well, vinegary, it won't damage your airways when inhaled. And the smell dissipates rather quickly.

However, when it comes to food safety, vinegar hasn't been as thoroughly tested as chlorine bleach. Studies that find it kills germs are somewhat vague in terms of how much of the germs are killed. It would be great to have more specifics on its germ-killing capabilities since I'm concerned whether cleaning with vinegar during the flu season is enough to kill germs. But maybe for flu, it's strong enough but for fighting some strains of germs for food borne illnesses, it's questionable. But since I don't handle meat that often, I am not too concerned. And when I do handle meat, it's usually from a local farm where the chance of cross contamination is less.

So which is better?

I'd go with vinegar, for general cleaning, For my health and the health of the planet, vinegar is strong enough to handle most general cleaning tasks. Use full strength vinegar and never dilute it. In fact, if you dilute it, you may be intruding contaminated water. And if vinegar doesn't work, I use hot soapy water with baking soda. Don't mix baking soda (basic) and vinegar (acidic) because you will neutralize the two to make water.

I do have a small bottle of bleach, tucked away, for some reason. Probably a leftover from when I used to be stupid a non-greenie. Yea, that's how old it is. I should probably throw it out. One word of caution about bleach - never use bleach in combination with another cleaner, even vinegar, and especially ammonia as toxic fumes can result. Remember, premade products don't have to disclose their ingredients so you don't know if it contains ammonia. You may unknowingly wipe down a surface that you just cleaned with bleach. (Mixing chlorine and ammonia results in a toxic chlorine gas).