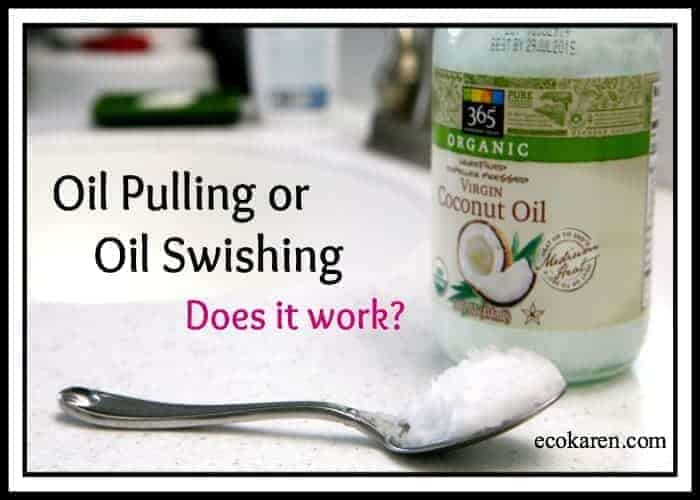 When I first heard about "oil pulling", I didn't give it a second thought. It seemed a little too exotic to try, never mind recommend it to my family. Mind you, I'm open minded about alternative health practices - I'm a Chiropractor, after all - but when it comes to oral health, I don't push what I can't find definitive research findings on. And oil pulling was one of them. That was awhile ago.

But when my poor daughter had her 4 wisdom teeth extracted over Christmas vacation and asked me about oil pulling, I almost spit out my coffee.

DD: Mom. have you heard of oil pulling?
Me: Yes, why? *raising one eye brow*
DD: Did you try it?
Me: No. But I heard it helps with oral health. Why do you ask?
DD: Well, I was bored, lying around, not being able to eat or do anything, so I googled, 'how to heal faster after wisdom tooth extraction' and oil pulling came up! So I tried it.
Me: Wow. I'm impressed! *putting down the coffee mug* I knew about it for awhile but I thought you'd think it was weird!
DD: It said, it kills bacteria and I won't get infected from the surgery. So I tried it gently earlier and I didn't throw up!

My college co-ed has all grown up! She's no prima donna but I thought for sure she'd roll her eyes at something that involves putting a spoonful of slimy grease into her mouth and swishing it around for what seems like eternity, just to keep her teeth clean. But leave it to kids to make up their own minds at their own pace. I guess college does that to a kid.

Anyway, I looked into what the big hoopla was about oil pulling and this is what I found out recently. I didn't find these articles a few years ago. How times have changed.

Oil Pulling or Oil Swishing - Does it work?

Oil pulling is an ancient Ayurvedic method of improving health by using sunflower or sesame oil in your mouth. The practice goes back over three thousand years for addressing over 30 types of ailments, including diabetes, migraine, asthma and oral health. According to the Journal of Ayurveda and Integrative Medicine, the original practice involved filling the mouth cavity with sesame oil, with no room for gargling for 3-5 minutes and then, release. And since each section of the tongue is connected to different organ such as to the kidneys, lungs, liver, heart, small intestines, stomach, colon, and spine, the oil therapy can be preventive and curative for many different systemic ailments that involve those organs.

Are there any studies that prove that oil pulling cures illnesses that are connected to these systems? Not that I am aware of but like many ancient health care practices that do not have 'double blinded control' study results, thousands of years of practice couldn't be wrong. Nevertheless, I couldn't find any more information than just a statement that it "helps" those ailments. But there are evidences for reducing plaque and improving oral health. There was a small study done with 20 male subjects that showed same level of plaque reduction with oil pulling compared to chlorhexidine, a chemical mouthwash in the control group. But there are skeptics, mainly, American dentists, who state that using any liquid should improve oral health as it's better than NOT doing anything. Not sure about that but they are entitled to their opinion.

What kind of oil should be used? The original Ayuverdic method used sesame oil but in recent years, coconut oil has been used as well. Asia Journal of Public Health published a study that stated that coconut oil exhibited antimicrobial activity against S. mutans and C. albicans whereas sesame oil had activity against S. mutans in biofilm models, concluding that coconut oil has better antimicrobial effect than sesame oil. I tried it with organic sesame oil but the odor was too strong for me. I couldn't do it. But if you want to try sesame oil, make sure it's organic and unrefined.

How does the mechanism of oil pulling work? According to this one study, saponication and emulsification of the oil in the mouth, during swishing, mechanically pulls the bacteria off the oral cavity, and the oils kill the specific organisms. In essence, there are physical changes that occur upon the oils being mixed with saliva - saponication and emulsification - and due to their antimicrobial properties, plaque causing microorganisms get killed in the process.

Armed with these facts, and after having the discussion with my daughter, my husband and I decided to try oil swishing with coconut oil. So we've been oil pulling/swishing since January.

But how do you exactly oil pull?

How to oil pull

A few things about oil pulling that you should know. You can use sesame oil or sunflower oil. I didn't like either so I used coconut oil. Sesame oil made me gag and I didn't find enough evidence that sunflower oil is as beneficial as sesame or coconut so I didn't try it. If you are allergic to coconut, obviously, don't use coconut oil. Try sesame oil instead. You must swish for at least 20 minutes, no more, no less. And this is the most important thing....YOU CAN'T SWALLOW THE OIL. Oil is toxic once it's been detoxing your mouth. In fact, someone on Twitter sent me a post about "Lipoid Pneumonia" from swallowing toxic oil from oil pulling. That doesn't sound fun. So, don't swallow and spit out in a trash can.

What happened to my health as result of oil pulling? Here are my observations.

How about all the systemic cures?

Well, since I'm in good health, I didn't notice any improvements or cures. I also couldn't find any research that indicated the connection between cures for ailments and oil pulling. I'm sure someone is doing that research as you read this.

Also, some people report whiter teeth since oil pulling. I didn't check my teeth before I started oil pull so honestly, I couldn't tell you if they are whiter. But I heard that your gums get healthier (great for gingivitis) and teeth get whiter.

Would I recommend oil pulling?

Yes. I think it definitely reduces plaque, improve halitosis, and kills microorganisms that cause a myriad of oral health problems, including cavities. While I'll admit, I am now brushing and flossing more regularly - especially flossing - so maybe that could have contributed to the improvement but above studies have shown that coconut oil pulling definitely improves oral health. Therefore, I don't think my experiences were incidental. Besides, I don't lose any time doing it since I do it while showering. It's no time taken out of my day.

I buy a tub of organic coconut oil from Costco and I fill an empty bottle to use it in my bathroom. If you don't have a Costco near you, you can find one at your local grocery store or on Amazon. (Affiliate)

Have you tried oil pulling? What have you noticed?

If you haven't, try oil pulling. You have nothing to lose.