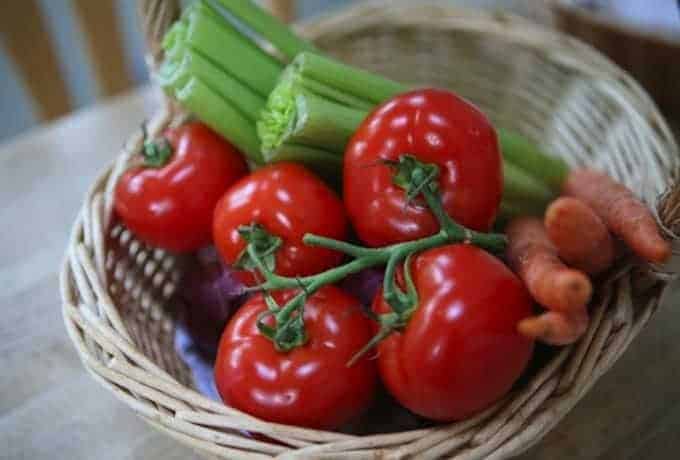 **Please refer to the Environmental Working Group's Shopper's Guide Page for the current year's information. It'll be updated annually. You can also print the list for your wallet from the page for FREE.

I try to buy organic products as much as possible. But lately, with frugality being the name of the game, I tend to question, "Can I get away with buying non-organic for this one?" before I pick up a bag of oranges or potatoes. So I researched to see what I can get away with.

According to Consumer Reports.....

Buy these items organic as often as possible

Based on an analysis of more than 100,000 U.S. government pesticide test results, researchers at the Environmental Working Group (EWG), a research and advocacy organization based in Washington, D.C., have developed the “dirty dozen” fruits and vegetables, above, that they say you should always buy organic if possible because their conventionally grown counterparts tend to be laden with pesticides. Among fruits, nectarines had the highest percentage testing positive for pesticide residue. Peaches and red raspberries had the most pesticides (nine) on a single sample. Among vegetables, celery and spinach most often carried pesticides, with spinach having the highest number (10) on a single sample. (For more information on pesticide levels for other types of produce, go to www.foodnews.org)

You greatly reduce the risk of exposure to the agent believed to cause mad cow disease and minimize exposure to other potential toxins in nonorganic feed. You also avoid the results of production methods that use daily supplemental hormones and antibiotics, which have been linked to increased antibacterial resistance in humans.

Children’s developing bodies are especially vulnerable to toxins and they may be at risk of higher exposure. Baby food is often made up of condensed fruits or vegetables, potentially concentrating pesticide residues.

Buy these items organic if price is no object

Multiple pesticide residues are, in general, rarely found on conventionally grown versions of these fruits and vegetables, according to research by the EWG. So if you’re buying organic only for health reasons, you may not want to pay 22 percent extra for organic bananas, let alone more than 150 percent for organic asparagus.

Breads, oils, potato chips, pasta, cereals, and other packaged foods, such as canned or dried fruit and vegetables.

Although these processed products may have lower levels of contaminants in them, they offer limited health value because processing tends to wash away important nutrients. The process of milling organic whole grains into flour, for example, eliminates fiber and vitamins, though they are sometimes added back in. The more a food is processed, the less health value its organic version offers, especially in products such as cereals and pastas with labels that say “made with organic ingredients.” Read the list of ingredients and you might find that while the flour is organic, the eggs aren’t. The processed foods with the most added value are labeled “100% Organic” and “USDA organic.” Price premiums vary. In our survey, organic Heinz ketchup cost 25 percent more than the conventional product; organic minestrone soup was only 8 percent more.

Whether caught in the wild or farmed, fish can be labeled organic, despite the presence of contaminants such as mercury and PCBs. Some wild fish such as bluefish are very high in PCBs, and tuna and swordfish are laced with mercury. The USDA has not yet developed organic certification standards for seafood. In the meantime, producers are allowed to make their own organic claims as long as they don’t use “USDA” or “certified organic” logos. California, however, recently passed a law that prohibits the use of any organic labeling on fish and other seafood until either state or federal certification standards are established.

Unless a personal-care product consists primarily of organic agricultural ingredients, such as aloe vera gel, it’s pointless to buy organic in this category. Most cosmetics contain a mix of ingredients, and USDA regulations allow shampoos and body lotions to carry an organic label even when water is the primary ingredient, Hydrosol may also be listed as a primary ingredient in organic products even though it may be primarily water infused with only a small fraction of organic plant material.

While the USDA claims that organic labeled-cosmetics follow the same standards as food, we have found indiscriminate use of synthetic ingredients and violations of food-labeling standards. “Many of the ingredients in personal-care products didn’t grow out of the ground but in test tubes--they’re chemicals,” says Lauren Sucher, director of public affairs at the EWG. Just because a product has the word “organic” or “natural” in its name doesn’t necessarily mean it’s safer. Only 11 percent of ingredients found in personal-care products, organic or not, have ever been screened for safety. In fact, when the EWG conducted its own safety rating of these products (available at www.ewg.org ), scoring them on a scale of 0, for those posing lowest level of concern, to 5, for the highest concern due to potentially unsafe ingredients, those with scores of 4 or more included benign-sounding Naturessence All Day Moisture Cream.

Of course, eating organic always tastes better and has better nutritional value but when the money is tight and if I need to sneak in a few non-organic items here and there, now I am armed with my list of foods that I can safely buy. To make my brain strain less, check out this page that lists Dirty Dozen and Clean Fifteen every year and there is a cheat-sheet you can print to carry at the bottom of the post.