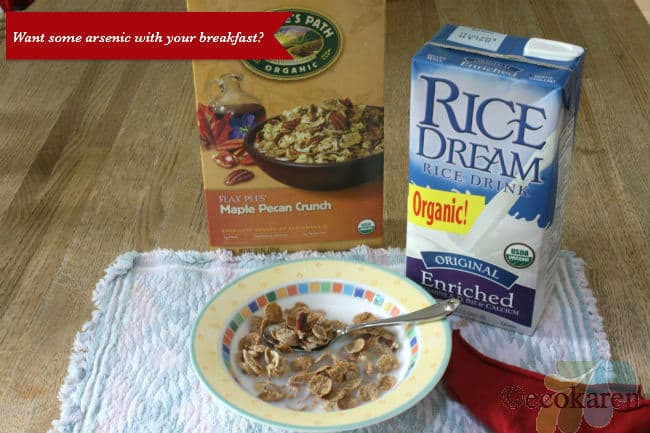 Arsenic (in rice) is back in the news again. And this time, it's from Consumer Reports, armed with data with arsenic levels in over 200 rice and rice products that they tested. The same products that FDA tested but declined to take any action on. But this is not the first time a study was done on Arsenic in rice. A noted Arsenic expert Professor Andrew Meharg  has been warning the world since 2007, according to Green Talk. Remember the Dartmouth study back in February that triggered Anna to started a petition and wrote about it here?

But, despite all the studies, the FDA and the European Union have failed to act, still. Anna's petition calling on the FDA and EU to regulate arsenic in rice and by-products is still going on. And I'm strongly urging you to sign it because it's imperative that we ask FDA and EU to change their standards because rice is not just an ethnic food for small number of people but is in so many things we eat. And if you are on a gluten free diet, the chances are, you are eating more rice than than you realize.

And yes, as an Asian family, we probably eat rice more often than you do. But ironically, my kids are allergic, not sensitive, but ALLERGIC, to gluten! So in addition to rice being our "comfort" ethnic food, it's our main source for carbs, out of necessity, like gluten sensitive people! So imagine how I felt when I heard this news.

I emailed our brown rice company, Lundberg Farms, about the latest Consumer Reports. And they confirmed that arsenic is found in their rice, both conventional and organic. And that they are still testing. We used to special order 25 lb bag from the local Whole Foods because they don't carry such a large bag in the store. But we go through a bag this size in less than 3 months. And we only eat brown rice because, you guessed it, it's found to be more nutritious! What irony that brown rice has higher level of Arsenic than white rice and yet, it's more nutritious and is recommended over white rice. Can you hear my groaning?

The results of the testing for arsenic on rice and rice products published by Consumer Reports on September 19, are consistent with our initial findings for levels of inorganic arsenic. Though we are still in the early stages of our efforts to quantify the levels of arsenic in our rice and rice products, we can report that the average level found in our rice products is 95 ppb. These results are from over 120 samples from the 2011 crop, 65% of which were brown. ... Our preliminary data is also consistent with the FDA’s first analytical results on arsenic levels in rice and rice products, posted on September 19. Based on the available data and scientific literature, FDA is not recommending changes by consumers regarding their consumption of rice and rice products. Eating a balanced and diversified diet that includes a variety of grains in order to ensure good nutrition is FDA’s current advice for consumers.

Great. Now what? Of course we eat a "balanced and diversified diet". We don't just eat rice, three meals a day. But we eat this for breakfast too.

Yup. That was my breakfast...before this news hit. Organic should be safe, right? Wrong. Inorganic arsenic that was used as fertilizer years ago is till in the soil contaminating any crop that grow on it, including organic rice. So, a glass of organic rice milk with my Nature's Path Flax cereal which contains brown rice flour, is the arsenic cocktail of my choice to get me started for the day.

I digress. This is the reply I received from Lundberg Farms when I asked whether organic rice was affected with arsenic.

Thank you for reaching out to us for information your questions are very important to us. Our tested samples include both product categories that we offer Organic and Eco Farmed. We plan on testing the next two (2) years of rice harvested in order to provide further analytical data to consumers. We are also working with local growers to find ways to mitigate the arsenic levels in the finished product. Our testingpan is ongoing but we are definitely committed to being open and honest about our practices and results.

There is arsenic in my food! @US_FDA needs to act! via @ecokarenlee   (<--Yes, click and tweet that!)

That means, I won't be buying their organic brown rice anymore. But how did arsenic get into organic rice? Grist has a great article on how that happens. But I learned the following from Anna. Yeah, it takes a Jewish woman to educate me - the Asian - about how rice is grown. But I don't care who's teaching whom as long as we DO something about it, right? Like signing this petition....

How did Arsenic get into rice in the first place? Arsenic is a naturally occurring element in the soil. However, inorganic arsenic is found in the soils that were contaminated by arsenic based pesticides and fertilizers, industrial districts or mining areas, municipal waste, or contaminated water.
Eighty percent of the rice is grown in the US is from the south central area on lands that were previously sprayed with arsenic pesticide to reduce cotton boll weevils. In addition, arsenic laden manure has been used as fertilizer. Arsenic remains in the soil. Due to the nature of how rice is grown in flooded waters, it sucks up the arsenic from the soil.

What is the danger?  According to the EPA, the ingestion of inorganic arsenic can lead to cancer of the  skin, bladder, liver, and lung. There are no studies of low levels long term arsenic exposure in food; however studies relating to low level arsenic exposure  in water have shown increased likelihood of  diabetes 2 and poorer neuropsychological functioning.
According  to Michael Harbut, M.D., chief of the environmental cancer program at Karmanos Institute in Detroit, he suspects “there is an awful lot of chronic, low-level arsenic poisoning going on that’s never properly diagnosed.”

Why should YOU  be concerned?  You might be thinking, “I don’t eat rice so I can’t be affected.” Not true, since many products contain rice and its by products. Look for rice flour, brown rice syrup (Lundberg's brown rice syrup was found to have 111-136 ppb), and rice in the crackers, cereal, cereal bars, baby food, gluten free food, energy bars, and energy drinks just for  starters. Worse yet, babies  eat a lot of rice products such as cereals and needless to say, they are more sensitive to chemicals like arsenic. The level of arsenic that is allowed in water is - the most strictest state -  NJ  and is 5 micrograms per liter of water.

Does it affect all rice? No. However, 80% of all rice grown in the US comes from areas where inorganic arsenic is an issue, like the South. California is better than the South but there is still arsenic in California grown rice. Jasmine and Basmati rice are better than short or long grain rice. It takes some legwork to know which rice products are safer than others. And It doesn’t matter if you only eat organic rice since arsenic is already in the soil before rice is planted.

What can you do to reduce Arsenic level? Consumer Reports recommends  certain guidelines to limit your rice intake. But simply, wash your rice first and cook it in 6 parts water to 1 part rice. Read here for more tips, different grains to source, and how agricultural changes can reduce the problem. Also, limit your daily intake of rice.

But you see, I have a problem with this limiting my intake of rice. I might not eat rice every day but if I'm having rice milk with cereal that has rice in it, I've already went over my daily intake. Add an energy bar in the afternoon and a dessert made with brown rice syrup, I'm way over the recommended daily intake level.

So, while I'll try to limit my rice intake, we need to change regulation by urging FDA to change the standard. Sign the petition asking for regulation. We should not have to agonize over the ingredients so that we don’t exceed the daily rice limitations recommended by Consumer Reports. And please share the petition with your friends and family (ten per day) right from the petition page. You can also share on Facebook, Twitter, and email.

Petitions by Change.org|Start a Petition »

I signed the petition and have been sharing and inviting people to sign. We NEED to get a standard established so we know what to avoid when we are at the market. We can't play Russian Roulette with our health!

P.S. There were levels of Arsenic in the foods that are pictured on this post. Now, tell me, you haven't had at least one of these foods lately. Check the ingredients label. If it has rice in it, you are eating arsenic.