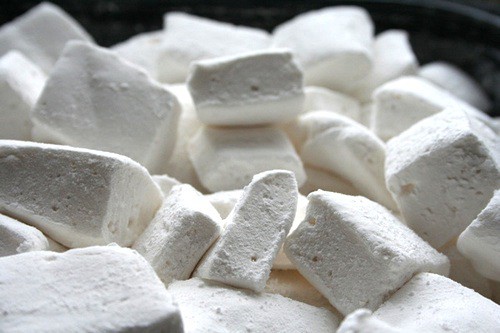 But did you know that vegans don't eat marshmallows??? I had no idea.

Here are the list of ten things vegans don't eat, according to Shine.

2. Fish and shellfish - for obvious reasons they don't eat the whole fish or shellfish but for this reason, Omega-3 Fish Oil supplements are also off limits, as well as calcium if they are derived from shells of shellfish.

3. Dairy products. - everything from milk and yogurt to cheese and butter.

4. Eggs. - that means mayonnaise and anything else made with eggs like Caesar salad dressing (it also contain anchovies,) most baked goods, and some sauces like Hollandaise sauce.

6. White sugar. - Some white sugar is processed with bone char, according to PETA. (I had no idea!!)

7. Most beer. - Guinness Beer is filtered using tiny amounts of gelatin derived from fish bladders. While some beers are vegan, others are filtered using egg whites or sea shells, according to barnivore, a vegan beer and wine guide.

8. Some breads. - while many simple breads are a-OK, containing just four ingredients (flour, yeast, water, and salt) many breads and baked goods are made with whey (a dairy product) or with butter, eggs, or sugar.

9. Marshmallows. - these and other foods, like gummy candies and Frosted Mini Wheats cereal, are made with gelatin -- a protein made from boiling skin, bones, and other animal parts. Surprisingly, though, a lot of junk food qualifies as vegan, even if it is unhealthy.

10. Salad dressing. Salads are great for vegans, but not necessarily the dressing. Scan the ingredient list, and you'll often find lecithin, which helps keep oil and vinegar from separating, and can be derived from animal tissues or egg yolk (both no-no's for vegans) or from soy (OK). Again, Caesar salad dressing has egg yolk and anchovies.

Some surprising foods that are NOT vegan are: