Home » HEALTH » Natural Living » Non-Toxic Living » Is Walmart on the right track in eliminating toxins from their products? 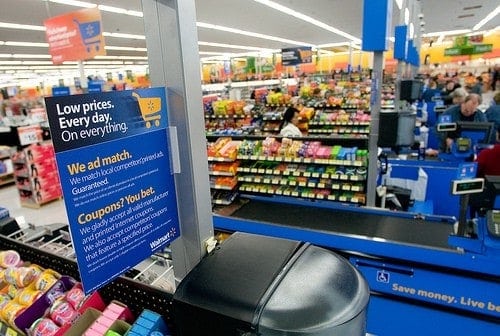 Back in April of 2013,  Safer Chemical Healthy Family (SCHF) started  Mind the Store Challenge and urged 10 biggest retailers, including Walmart, to change their policy on toxic chemicals and to create an action plan to address 100+ hazardous chemicals in their consumer products. And kudos to their persistent pressure with emails and petitions, Walmart recently announced that they intend to start changing their sustainable chemical policy. Here is the actual announcement from Walmart and how they plan to implement this policy change.

Their new policy on sustainable chemistry is HUGE since Walmart is No. 1 retailer in the country and I assume others will follow. I don’t shop at Walmart nor at Target because my eyes get teary from all the toxic chemicals in the store but I do go to Sam’s Club, a wholesale club that Walmart owns, where I buy bulk items and some organic items. So this news is a victory, in my mind. Yes, Walmart is still far from being perfect and yes, their labor practices also need changing but this sustainable chemical policy change is hopeful. But also, I’m optimistic that other big retailers, like Target, Walgreen’s, Costco, Lowe’s and alike will soon follow in its footsteps.

On a recent call between SCHF and Walmart’s Sustainability Team, Walmart told SCHF that “they were taking calls and emails seriously and were carefully assessing the Hazardous 100+.”

This is an unusually substantive announcement and Walmart deserves credit for that. We’re encouraged that they’ve described this as just the beginning of action on chemicals rather than the end.

While the number of chemicals is limited, the action is meaningful. They are not just moving away from several known toxic chemicals but are going deeper, using their position to make sure the alternatives are safer. That’s progress that can ripple across the marketplace.

Also, the EPA’s Design for the Environment label is one of the few eco-labels that means something. If they pursue it for their private label products, the changes could be substantial and also bolster that label’s profile. Further, ingredient disclosure in a broad category of products will help consumers.

Clearly, the problem is much bigger, but Walmart’s announcement today appears to be a meaningful down payment on an enhanced chemical policy. We urge other retailers to both learn from and improve upon it.

On a personal note..

One of my high school friends is battling cancer as I write this. I don’t know if she ever shopped at Walmart. I don’t know if she was exposed to the chemicals Walmart is eliminating for sure but I bet she was at some point, from somewhere. As recently as last week, Proctor and Gamble announced that they will eliminate toxic chemicals triclosan and diethyl phthalate (DEP) from all its products by 2014, according to an announcement on the company’s website. P&G is the world’s largest manufacturer of consumer products, home to iconic brands including Cover Girl, Tide, Crest and Ivory. Who hasn’t used Ivory soap in their lives?

I’m sure my friend used these common household products, including health and beauty products from P & G. Obviously, there will never be a study on her body to confirm if any of these chemicals caused her cancer but something in her environment caused cancer as studies have shown, 90% of all cancer have no family history. In other words, cancer is not caused by genetics; it’s environmental. And it makes sense since we are exposed to more than 84,000 synthetic chemicals in our lives but only 7% have been tested. Only 7%! That means, we are a bunch or lab rats. This is totally unacceptable. And this is why I always urge everyone to eat organic, put on organic or natural non-toxic make up as our skin is the biggest organ in our body, and don’t be exposed to synthetic pesticides or hormones.

Walmart eliminating 100+ hazardous chemicals will lower the chances of millions of people being exposed to these potentially cancer causing chemicals.

Is Walmart on the right path?

Is it greenwashing? We’ll wait and see if they carry out the policy they said they would. Will others follow? I think so.

A big shout out goes to SCHF in influencing Walmart’s decision and so glad organizations like SCHF exist. As one of SCHF bloggers involved in the Mind the Store Challenge, my friend Anna from Green Talk went to Lowe’s in April with the same message. I’m hoping Lowe’s and 8 other retailers will follow Walmart’s suit and eliminate these toxic chemicals from their products.

What do you think? Is Walmart’s effort to eliminate toxic chemicals, enough to make you shop there more often? Do you think Walmart’s sustainable chemical policy will make other retailers to follow suit? Is Walmart on the right track in eliminating toxins from their products?

Previous Post: « How to Pickle Your Summer Harvest
Next Post: How to Make a California Roll {video} »