Vietnamese Pho – Vegetarian and Non-Vegetarian – is a great gluten-free noodle dish since it’s made with rice noodles. The rich soothing broth is the key to a good Pho so take the time to make homemade broth before adding other ingredients. 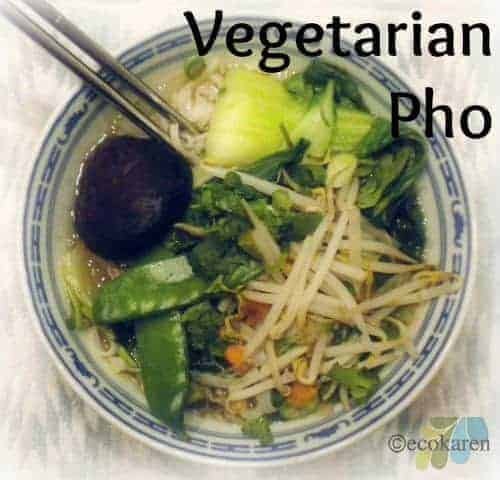 It was a bit chilly today and it’s getting to be a real “Fall wanting to be Winter” kind of weather. And when it gets cold like this, I want soup, a hearty noodles soup, to be exact.

So I made Pho (pronounced Fuh) for dinner tonight, a Vietnamese Rice Noodle Soup.

There are many MANY recipes for making this delectable and heart warming Vietnamese noodle soup. But the secret to making great Pho is in the broth and I discovered that dry roasting the spices is the key for a deep rich flavored broth. Some people broil vegetables and spices before adding them to broth. But I just dry roast the spices in the pot and I think it does the trick.

I never made or ate non-vegetarian Pho so I have no idea how others taste. But I assume, a vegetarian version has to be the original way that Vietnamese people made it because it is so flavorful and clean tasting that I can’t imagine why you would need to make it any other way.

Besides, meat must have been very expensive in Vietnam, long time ago, so they couldn’t have made it with meat originally. But if you want to make it with beef or seafood broth, then, you can certainly do that too. For beef broth, you’d have to simmer shank bones (with marrow inside) for about 3 hours instead of just one hour as in this recipe. But try this first. You won’t regret it.

I skipped sugar in this version too as I don’t think it’s necessary.

Read the entire recipe before shopping for ingredients. In addition to the list of ingredients below, you’ll need a 9 oz. package of rice noodles. 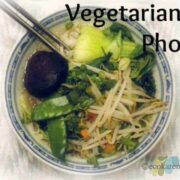 To add to Simmering Broth