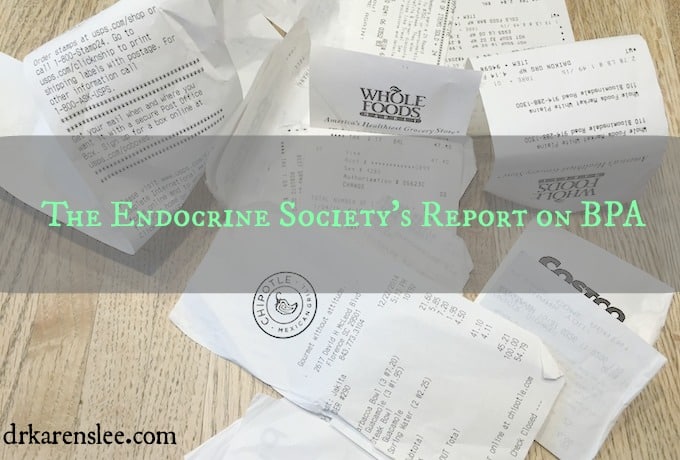 I know most of you heard that Bisphenol A (BPA) is harmful and that hard plastic water bottles, that made Nalgene famous, contained BPA. Since the revelation, Nalgene and other ‘like’ manufacturers voluntarily pulled all their BPA containing plastic bottles off of the shelves and replaced them with “BPA-Free” water bottles. Wal-Mart also volunteered to take all the BPA containing products from shelves as well as Toys-R-Us.

There is so much information about BPA lately that there isn’t a day when I don’t hear about at least one new research finding about it. (But FDA still denies that BPA is dangerous.) The latest news on the dangers of BPA was on Thursday, June 11, 2009, when The Endocrine Society published a new statement that many chemicals, Bisphenol A, pesticides, pthalates, and various other chemicals that disrupt the endocrine system, are of a great concern for public health and should be avoided. This is the latest statement, collectively issued by a medical society, urging the public to avoid any products containing BPA and indirectly pressuring FDA to ban the chemical.

According to the Environmental Working Group (EWG.Org), even the low but continual amounts of BPA have been found to cause prostate cancer, testicular cancer, low sperm count, breast cancer, diabetes, heart disease, miscarriages, DNA change, endocrine disruption, behavioral problems, early onset of puberty, and even obesity. University of Missouri’s study conducted by a researcher and BPA expert, Frederick vom Saal, concluded that even a miniscule but continual amount of BPA can cause heart disease and diabetes. According to The Journal Sentinel, and the NY Times, 93% of Americans tested have BPA in their blood.

How do we avoid BPA since FDA refuses to ban this chemical from the products eventhough Canada has banned it? As one of my favorite green websites the Daily Green suggests, you can avoid products that still contains BPA by knowing what they are. And they are any hard plastics that are marked #7, canned foods, canned beverages, baby bottles, water bottles, “microwave safe” food containers, and even dental sealants. (But be aware…some soft plastics are marked #7, making it difficult to decipher if it contains BPA or not.)

Since we are on the topic of FDA’s stance on BPA, it is interesting (and not surprising) to note that FDA is NOT convinced that BPA is harmful, citing that there are not enough studies to indicate that BPA is harmful but that there are enough studies to show BPA to be harmless. It’s also not surprising that the plastic industry and the American Chemistry Council sponsored the studies that FDA is referring to that found BPA as being harmless. And now, international consortium is stating it’s skepticism towards FDA’s stance.

Despite the resistance from FDA on banning BPA, many lawmakers at home and abroad aren’t waiting for the ruling to ban BPA. Canada has banned BPA, Chicago is the first state to ban BPA, New Jersey, California and ten other states are considering banning BPA.

Please urge your congressman/woman to ban BPA by signing a petition here.

Previous Post: « How to Protect your Skin Against Sun Damage
Next Post: How to Make Dryer Balls with Socks Without Partners! »