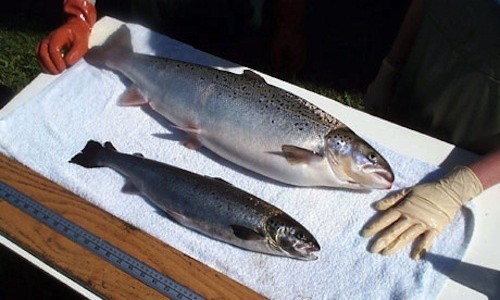 That’s right. GENETICALLY ENGINEERED SALMON – FRANKENFISH! – will soon be available  – like in 18 months – for you to serve for dinner if FDA approves it on September 17th. ** See below for undated info on hearing dates**

That’s ONE week away!!

Wait. You hate fish? You don’t like salmon? This is not just about salmon. It’s about biotechnology. It’s about fooling with nature. It’s about our food supply. There are many articles about the genetically engineered (GE) salmon itself but I have a bigger issue with this. It may apply to you too. Read on.

What does that mean? Let me rant…..

I heard about this genetically engineered (GE) salmon or “frankenfish” technology that Aqua Bounty Technology (ABTX on London’s Stock Exchange) was trying to push the FDA to approve back in August. I scoffed at the idea because, I naively thought, “Pffft. Who, in the right mind at our government, would approve this?” Man, hit me over the head, will ya, because I couldn’t have been more wrong! I’ll get to the actual franken-salmon thing later but FDA is actually considering approving this technology?….to “invent’ new species for us to consume as food…to create a brand new species for us to eat, because you know, we are “running out of food” to eat?

So, if you thought this doesn’t apply to you because you don’t eat salmon, think again because this technology, if approved, will entice more companies, if not already, to invest millions of dollars into developing genetically engineered meats like pigs, chickens, lambs, and what else? Do I foresee even ‘genetically engineered humans’ for our future consumption? Or how about just a chunk of meat-looking-thing for sale in the meat section at your local supermarket? That is so totally disgusting and so wrong on so many levels that I can not believe I even typed the words here. It makes me nauseous even thinking about it. But you know what? I thought ‘that’ back in August about salmon! This is a total “Brave New World” crap! It’s bad enough that we are dealing with GMO’s in foods that sneak into cereal boxes and cookies that we feed to our kids. And now, we will be eating fish fillets that are laden with growth hormones and two different species of fish that was forced to grow twice the size of a normal fish? My hubby keeps telling me about this movie called, “Soylent Green” with Charlton Heston that was released in 1973. He says the movie is not too far from what’s going on right now with big corporations controlling what we eat for profit. It’s all about this type of big conglomerates controlling our food supply at its worst! I don’t think I need to watch it to know what the movie is about but the movie was made in the 70’s and talk about life imitating art!

OK. Before I pop my second vein, let me tell you some facts that we are “allowed” to know….because, you know, some things are, ummm…..”p.r.o.p.r.i.o.t.a.r.y.” *air quoting and rolling eyes in disgust*

What are the facts? (my thoughts in parenthesis): 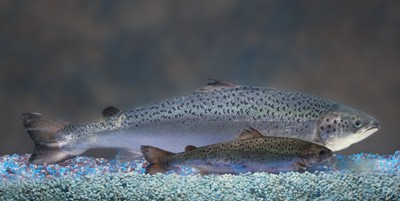 Why am I opposed to genetically engineered salmon? I’m sorry but genetically engineered a.n.y.t.h.i.n.g. is not what I want to put in my body nor into my family’s bodies, hence my opposition to Monsanto. I’m not a geneticist or a veterinarian but there is something wrong with a grotesquely large ‘man-made’ fish that was from two different species of fish. Although I don’t eat that much fish anymore but when I do, I don’t want to wonder if it’s the real thing or some scientific experiment. And how about my kids? How much of this type of scientifically invented petri dish foods will they eat throughout their lives when we are starting to feed them now? What will happen to their own genes and health of their bodies when they are at our age? How will their cells respond to all the genetically manipulated proteins and hormones laden foods they’ve eaten all these years?

What do you think?

Would you eat this fish? Would you eat anything that was grown with this type of technology? It’s not happening just to fish. It’s happening with corn, soy, barley, and on produce farms right now. But these are still considered as experiments. There are no long-term effect studies on humans ingesting these types of animal foods. Even the scientists at Purdue University say it.

Still not sure? How about this analogy, then? Sports. If this was a sporting event, (unlike to some, it’s not a life-and-death situation like eating, in my book.) steroids and growth hormones would definitely be considered as disqualifying factors. Are they not? I mean, didn’t Roger Clemens just get indicted for perjury for lying about steroid use while playing for the Yankees? Didn’t athletes get their medals taken away from the Olympics because of doping? How is it that it’s NOT OK for athletes to use performance enhancing drugs but we can ingest them from foods?

What is the FDA thinking?

So, why is the FDA trying to approve the technology, allowing artificial means of creating foods, allowing overabundance of growth hormones to exist in the foods and saying it’s safe for us to eat them? If it is “SAFE” to eat it, why is the FDA involved in “approving” them? It’s because they are using drugs on animals. It’s because they are not natural. It’s because they ‘appear’ to be safe. It’s because they ‘appear’ to be the same as the natural thing. And we know how accurate FDA has been in approving supposedly ‘safe’ drugs and later recalled after numerous deaths have been reported. Furthermore, when something goes wrong with this technology, how many fingers will be flying, trying to find blame? …at our expensive, to boot!

Do I trust the FDA if they approve this? NOPE.

Do I want to eat ANY fish if the FDA approves this? NOPE.

Do I want to eat ANY animal if the FDA approves this? NOPE.

My husband’s family is from the Pacific Northwest, you know, the “Twilight” country? Well, people from the Northwest are very proud of their forests and their fishing. There are no substitute for wild-caught Alaskan King or Chinook or Coho salmon. The annual salmon runs are big events in town. More people have salmon smokers in their backyards than BBQ grills. There are fish hatcheries where they help salmons to hatch and release the young into the wild. I used to be able to go to a nearby fishing dock and buy the freshest, just caught salmon, right off the boat. It’s true that it’s not so easy anymore. The salmon population has been dwindling. But, I think those fishermen will still tell you that even with the dwindling supply, genetically altered salmon is sacrilegious and is not the answer to the shortage supply of salmon. Even though ABTX claims to have solved the salmon shortage problem with the technology, it will actually kill the salmon industry, wild or farmed, because people, like myself, will be skeptical of eating ANY salmon since these GE salmon will not be labeled as such.

Let me leave you with links where you can read more on this issue. I’ve been reading, reading, and reading on this that it’s taken me three days to write this. I kept searching and reading and hoping, ‘What if it IS the same? What if it IS safe?” I assure you, they are NOT the same and it’s highly questionable that it’s safe.

Read these posts on GMO Salmon and I’ll let you be the judge. (I was going to add the link to Aqua Bounty here but they don’t deserve my link)

Again, please don’t take my word for it. Do your research and be scared…because, I am.