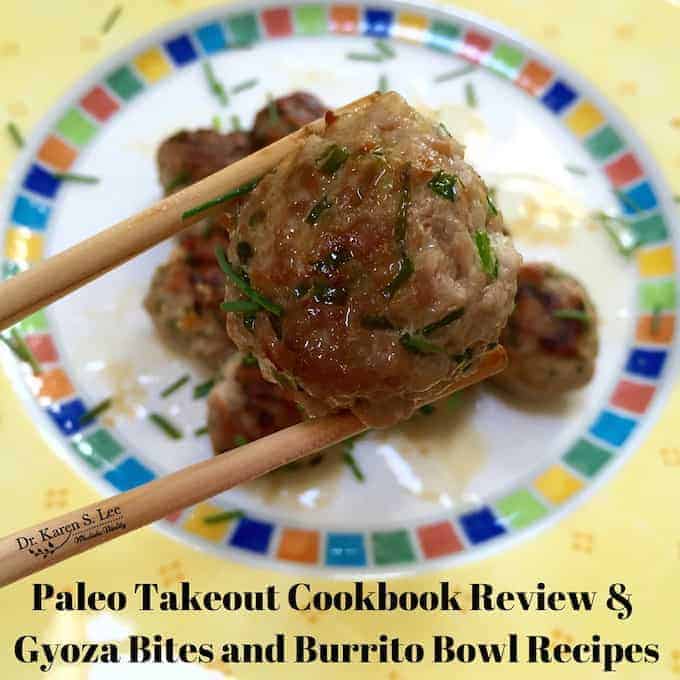 One of many challenges of eating healthy whole foods is not being able to take advantage of the convenience of eating out or ordering in take-out foods.

While there have been some improvements in fast foods, like Chipotle's and Panera Bread, other take-out foods are still known to be high in refined carbs, trans fat, hydrogenated oils, contain artificial flavors & colors, MSG, and other "mysterious" ingredients. Many of them are worse than packaged & processed foods but we wouldn't know it since nutrition label is not readily available, if at all. So it's best to stay away from take out foods.

When we were on the GAPS diet, we couldn't eat out or order in take outs. It made my life so hectic and stressful, always planning and cooking. Eating was not fun sometimes and oh, how I wished I could just eat food that someone else prepared for a change. But we just couldn't find foods that had the "allowed" ingredients in them -  my reason for staying away from take out foods.

Another reason why it's best to eat at home is to avoid possible foodborne illnesses. I can tell you from a personal experience how easy it is to get sick from eating out, even from reputable restaurants. It only takes one person who doesn't prepare the food properly and spread the contamination. Of course, that could happen at home too but there is a higher chance that food borne illnesses will happen at restaurants more than at home.

But lately, I've been fantasizing about take out foods again since we're mostly on Paleo and our diet is not was restricted as when we were on GAPS. 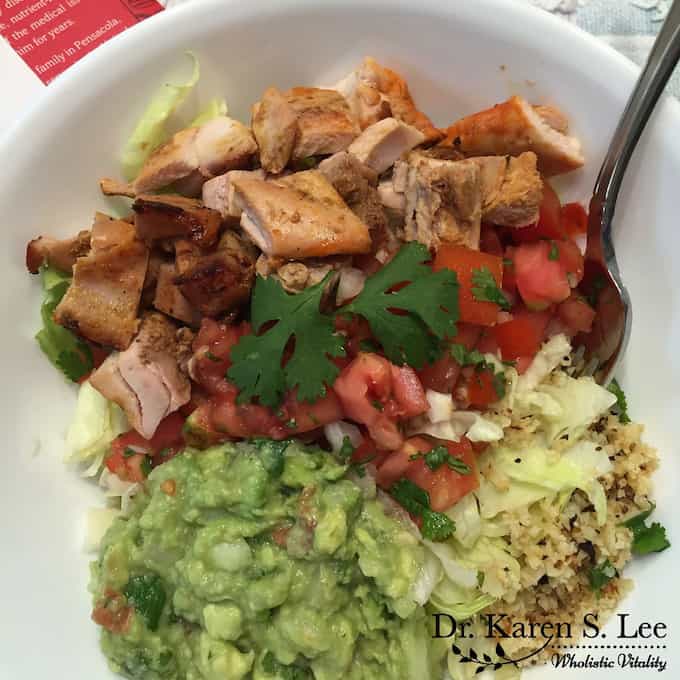 The only caveat is that I want to make take out foods at home so I can control the ingredients and quality. Is that like, "Stay In" food then? 😉 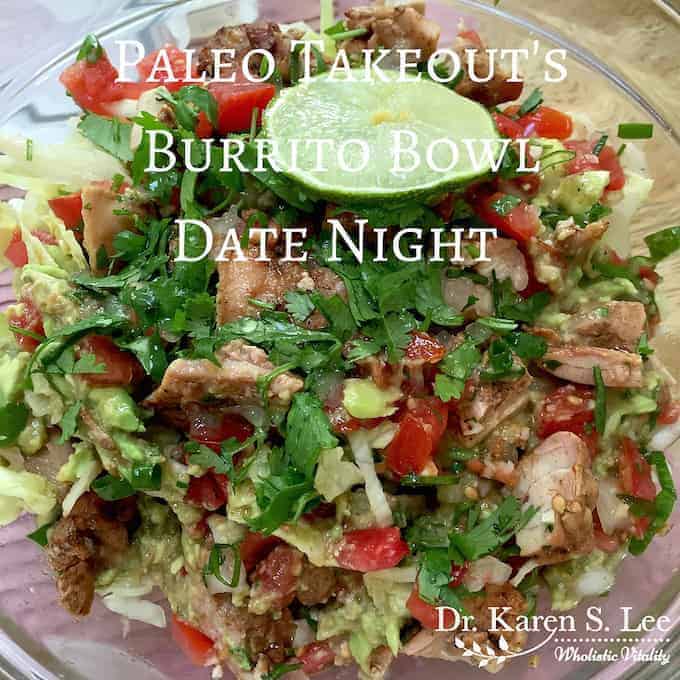 One of my favorite take out foods is the Burrito Bowl from Chipotle's. And if the stock prices are any indication, I'm not the only one who loves Chipotle who takes great pride in serving the most sustainable 'fast food with integrity' by using only non-GMO ingredients and humanely raised meats.

But even the bestest of best fast food take-out foods have limitations (I find Chipotle's Burrito Bowl a little salty for my taste.)

So how do you satisfy your take-out food cravings without compromising your health?

Paleo Takeout: Restaurant favorites without the junk comes to the rescue! 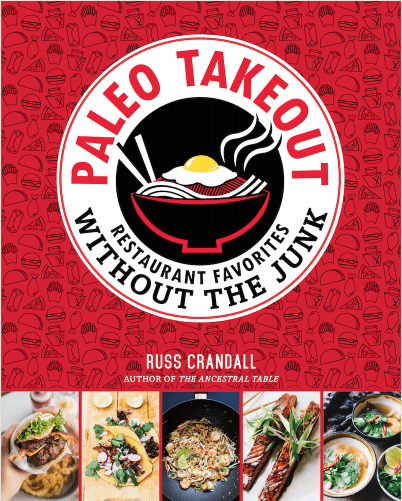 When I saw the title of the cookbook, I was immediately drawn to it because I really miss Chinese take-outs, pizza, Beef Teriyaki, Gyoza Dumplings, Pad Thai, Chicken Tikka Marsala, etc. I can prepare Korean meals so that was no big deal but I really miss others. So even if I had to cook, if I had the recipes for other quick, QUICK, take-out style recipes, I was game. And I was so glad that Russ Crandall had the same thought as I.

Russ Crandall has an amazing health recovery history.  He had a stroke at age 24 (!!), discovered he had Takayasu's Arteritis - the autoimmune disease that cause narrowing of pulmonary arteries - that kept him in the hospital for a month and a surgery to repair the narrowed arteries. When he found out Paleo style of eating might help him reduce inflammation - the most common cause of autoimmune (or any) disease - which in turn, will help his autoimmune disease, he went All In.

While he still has the autoimmune disease, it's under control with the Paleo diet. He lost the weight that he gained from taking immunosuppressants and he feels stronger than ever. As result, he wanted to share his story and share Paleo recipes that helped him to regain his health so he wrote his first gluten-free and Paleo cookbook, The Ancestral Table and his latest Paleo Takeout: Restaurant favorites without the junk.

The book is well thought out with definitions of various diets, including Paleo, WAPF (Weston A. Price Foundation), Whole Foods, The Perfect Health Diet and JERF (Just Eat Real Food.) I like the fact that he's more JERF than any one particular diet because that's how I'd like to eat. Crandall is flexible with some of the 'gray' area foods, like rice and potato, like I am. He believes if it doesn't bother your health, you should be able to add foods even if they are not Paleo friendly as long as they are real whole foods. I like that approach.

He has sections on; Essential Tools, Kitchen Gadgets, Essential Ingredients;(and where to buy them), Fats and Oils, and even explains Essential Techniques. He created a meal planning graph that tells you when to start which part of the dinner prep so you can cook the entire dinner under one hour! (pg. 23)

The book is divided into; Chinese, Japanese & Korean, Southeast Asia, and American Classics;recipes and sections on Sauces, Condiments, and Sides. It really is a comprehensive book on all types of take out meals. You can order your copy from Amazon here .

I tried many of the recipes and I'm going to share these two but you really need to try all of them. The directions are simple and easy to follow. He also has little bits of information on ingredients and cooking methods for some of them. Very helpful hints.

A note about Crandall's Korean recipes. They were a little different from how I cook but still, there weren't too different from mine. He has Kimchi, Bulgogi, Kalbi, and some side dishes that you can make Bibimbap with (no picture in the book though), so, he represented basic Korean foods pretty well.

Hope you like these recipes but seriously, you really need the book to make all the other classic take out favorites.

Gyoza Bites are the meat fillings of Gyoza Dumplings. These little bite sized balls were delicious and I'll be making batches to freeze them for my daughter in college so she can add them to bone broth. I decided not to use Crandall's dipping sauce because I was too lazy to go to the store to buy some of the ingredients I didn't have. I usually dip dumplings in Tamari and Vinegar with some hot pepper sauce, like Sriracha or just hot pepper flakes and they work just fine. But if you want to try his dipping sauce, you'll have to get it from his book. Is sounded like a real deal. 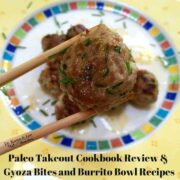 Second recipe I loved was Burrito Bowl Date Night...because, you know, it's a Burrito Bowl and it's Chipotle's specialty! The only twist to Crandall's recipe was using optional Cauliflower Rice, which I tried for the first time and it was a big hit! 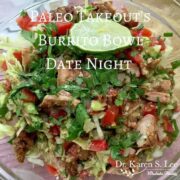 If you are not eating grains, make Cauliflower Rice or leave out the carbs all together. Either way, this is a great rendition of Chipotle's Burrito Bowl!
Course : Entree
Cuisine : Mexican
Keyword : Vegetable
Author: Dr. Karen Lee

DisclosureThis recipe may contain links that pay commission to this site when you purchase from the links, at no extra cost to you. Full disclosure!
Tried this recipe? Share your photo and mention @drkarenslee or tag #drkarenslee!
Disclaimer: I was given Paleo Takeout cookbook to review. As always, the opinion is all mine. This post may contain affiliate links which won’t change your price but will generate some commission as an Amazon affiliate.
« Lobster Roll with Homemade Mayo - Paleo and Keto Friendly
Food Safety Tips for Packing Lunch »